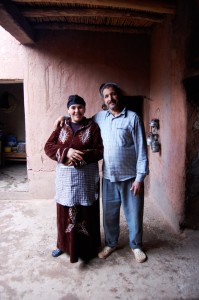 Malika and Ahmed, Berbers in the High Atlas Mountains

The Berbers are the indigenous people of North Africa.

Some people say that 12,000 year old cave paintings in Algeria and Libya are Berber, and some say  it’s mostly around the time of Caeser that Berber history becomes active. Mauretania  (Morocco) and Numidia (Algeria / Tunisia) are ancient Berber kingdoms from  ~200 BC – 46BC. North Africa was conquered by the Arabs in the 8th century and the Berbers became Muslim.

There are many divisions within the Berber population of North Africa, who identify with different tribes, and speak different dialects. There are also sub-saharan tribes who are genetically Berber but do not identify as Berber, such as the Tuareg.

Berbers call themselves “i-Mazigh-en” which loosely translates to Free People.

From ancient times until now, the Berbers in North Africa have been farmers, and you find terraced gardens from the rivers to the mountain peaks. Their food is grown organically and sustainably.

Today in the remote High Atlas Mountains and River Valleys in Morocco, Berbers continue to live very traditional lives. Electricity and running water are new conveniences in these ancient mud-brick villages, built on the slopes of mountains. The villages consist of family compounds, where the families and animals live in the same dwelling.

Berbers have a very different history from Arab Moroccans.  At this point in time, about 25,000,000 people speak Berber in North Africa. 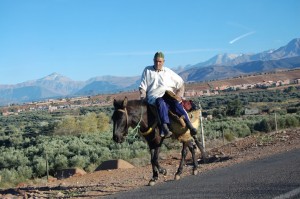 Returning from the Berber Market

As with most places in the world, most Berbers live in the cities, or have emigrated to Europe.

The traditional way of life is simple and family-based. All is shared, as extended families live together and take care of each other. The villages raise sheep, nuts, fruit and vegetables which go to an open market each week.

The villages work as a collective, with a village chief elected as representative and judge.

Most traditional Berbers are very poor, especially up in the mountains, where you have to walk for hours to get to a main road. Girls are very often married in their mid-teens.

There is a non-profit called the High Atlas Foundation which is working to eradicate the crushing poverty in the very remote communities.

The Berbers  are connected to the earth, very spiritual, with beautiful cultural and artistic expression. The sense of community is very strong. Perhaps these traits, developed over thousands of years, are what make them exceptionally civilized?