We begin our adventure driving amidst the majestic High Atlas Mountains, through the scenic route of Tizi n’Tichka’s lush oasis valleys and Tizi n’Test, mountainous areas highly popular with trekkers. You’ll stop for lunch in Ouarzazate, which was built by the French in the 1920s, and has since become the primary location of Morocco’s film industry. We’ll visit one of the famous kasbahs of Morocco, Tifoultoute, which was used as a hotel for the cast of Lawrence of Arabia in the 1960s. Although it was once protected by a powerful dynasty, now it is guarded by a sentry of large storks nesting atop its towers.After lunch in Ouarzazate, You’ll depart for Tinghir, traveling the rugged Road of a Thousand Kasbahs, some of which rise up like turreted sand castles along this ancient caravan trading route.This area has long been a popular location for Hollywood films such as Star Wars, The Last Temptation of Christ, Jewel of the Nile, Hideous Kinky and more recently Gladiator.Dinner and overnight at your luxury kasbah in Tinghir. 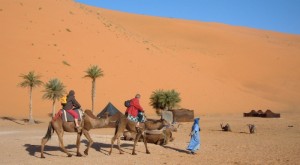 Following a delicious Berber breakfast, you’ll travel through the Dadès Valley, past dramatic escarpments and plunging gorges ………. then to Erfoud for your transfer to 4×4 vehicles, which bring you to the Merzouga entrance of the Sahara. Explore the mystical Saharan landscape as you ride by camel over the stunning sugar-fine sands of Merzouga as the red sun sinks. Watch traditional folkloric dance and listen to the heady intoxicating beat of Berber drum music and song during the traditional pouring of mint tea.

Enjoy the sights and smells of bread being baked in the sand dunes of Morocco, and a feast of harira soup, a savory tagine (stew with meat and vegetables), couscous, fresh fruit and exquisite Moroccan pastries.At nightfall, we’ll sleep under a nomad tarp beneath the flickering stars of the desert sky. Experience a sense of timelessness in the still, silent desert, unchanged since caravans loaded with spices, gold and indigo crossed long ago.Lodging is also available at Todra’s local kasbah at the edge of the dunes. Good walking shoes are recommended. 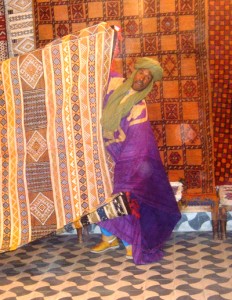 The central region is one of the most exciting and breathtaking destinations of Morocco, nestled along fertile river valleys, ancient palmeries and burnished mud-brick homes ablaze in vibrant color under the endless canopy of the clear blue desert sky.

Dinner and overnight at your luxury kasbah in Tinghir. 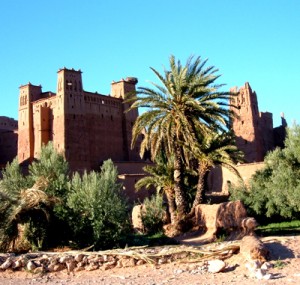 A special visit to the famous Kasbah Ait Ben Hadou…… Then continue your adventure along the majestic beauty of the High Atlas Mountains, through the scenic route of Tizi n’Tichka’s lush oasis valleys.

Back in Marrakech, the night beats in the heart of the old city’s famed square, Djemaa el-Fna, where delectable fare is grilled over coals in the bustling torch-lit open-air eateries. Mystical snake charmers, hustlers and mischievous monkeys are part of the nightly drama unfolding as acrobats, fortune tellers, musicians and storytellers seduce rapt crowds. Wind your way through the serpentine labyrinth of the spice-filled air of the bustling souk, unchanged for over 1000 years, where you’ll discover the best of traditional Moroccan craftsmanship.